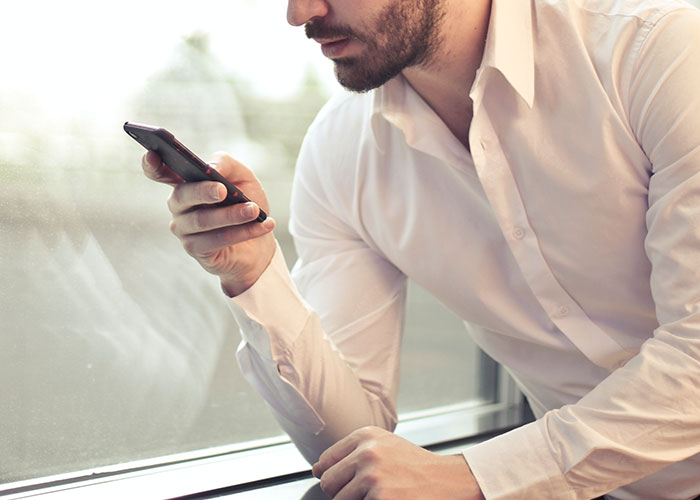 Pointless meetings are the scourge of our time. The sad fact is that many of them serve absolutely no purpose, except to allow some managerial staff to flex their stuff… and for everyone to pretend that there’s ‘quality’ team-building going on.

Some meetings could have been emails. Others could have several times shorter or quick Zoom calls. Still others have no reason to exist. Like, at all. Meetings should ideally be short, to-the-point, and serve a specific purpose. Sometimes, a face-to-face meeting is vital for the longevity of your career and for the company itself.

However, we don’t live in an ideal world. Redditor u/ChoctawJoe, an independent contractor, shared a bunch of messages that he got from his company, demanding that he participate in their meetings. The exchange between the two of them went absolutely viral on the r/antiwork subreddit, and it spread like wildfire from there. Scroll down for the full story, Pandas, and let us know what you think in the comments.

Oh, and gentle spoilers: in case you were wondering, no, the company does not compensate the contractor for driving 120 miles to and from the meeting. The only ‘compensation’ they provide is a sad little sandwich. Sure, we sometimes enjoy grabbing a bite from Subway, but c’mon! Bored Panda reached out to redditor u/ChoctawJoe, the author of the viral r/antiwork post, and he shared some of his thoughts with us. Read on to see what he told us.

Pointless meetings that waste everyone’s time, energy, and sometimes even money, are an issue that many workers face

An independent contractor shared what happened after he refused to waste his time going to unpaid, useless meetings 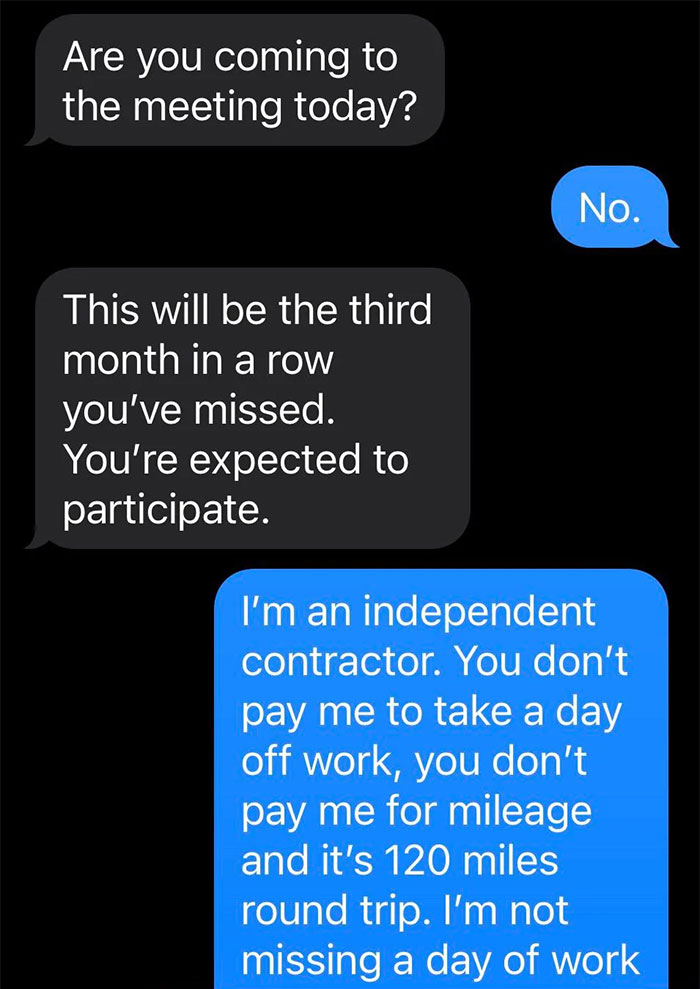 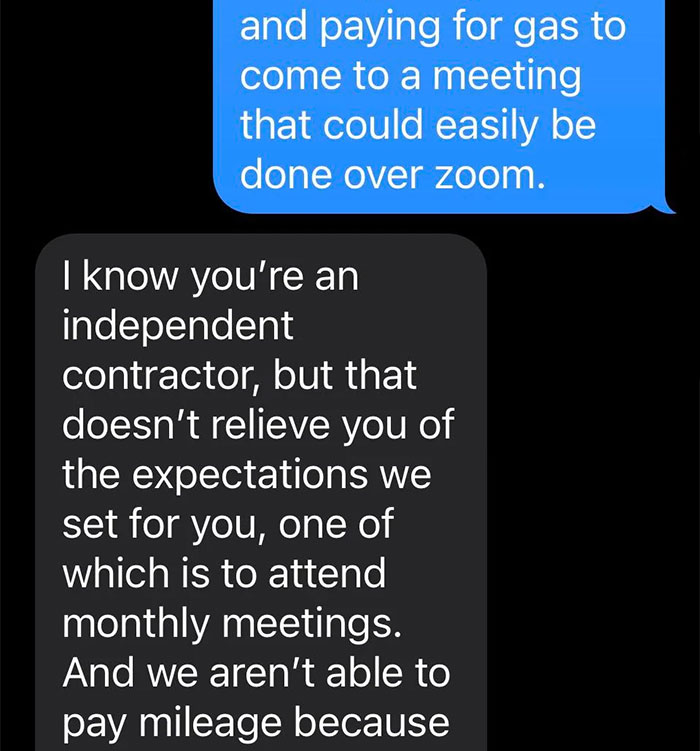 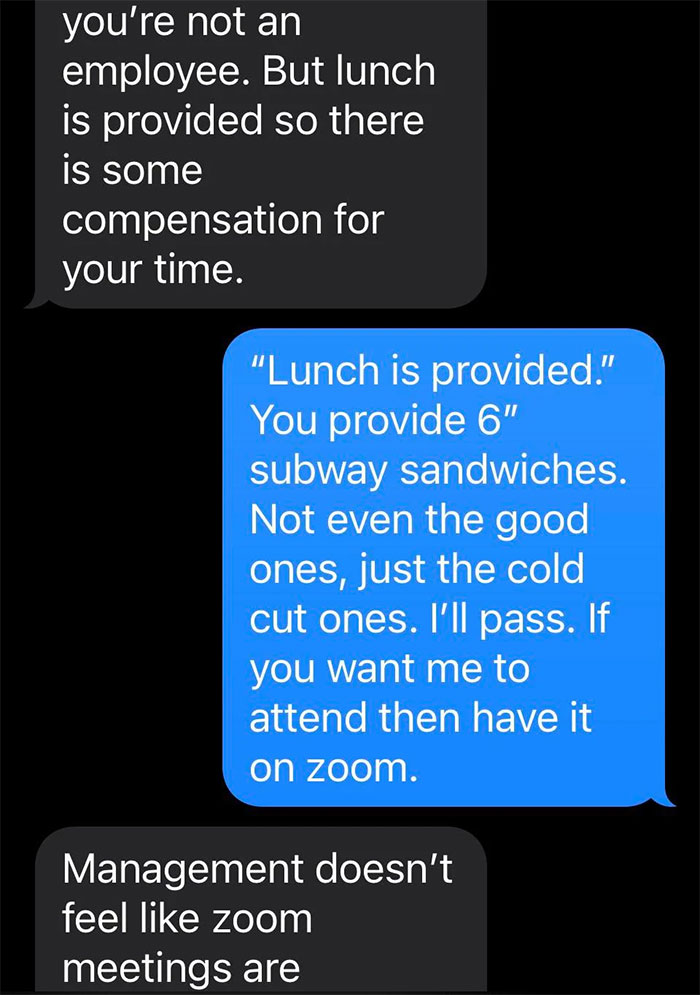 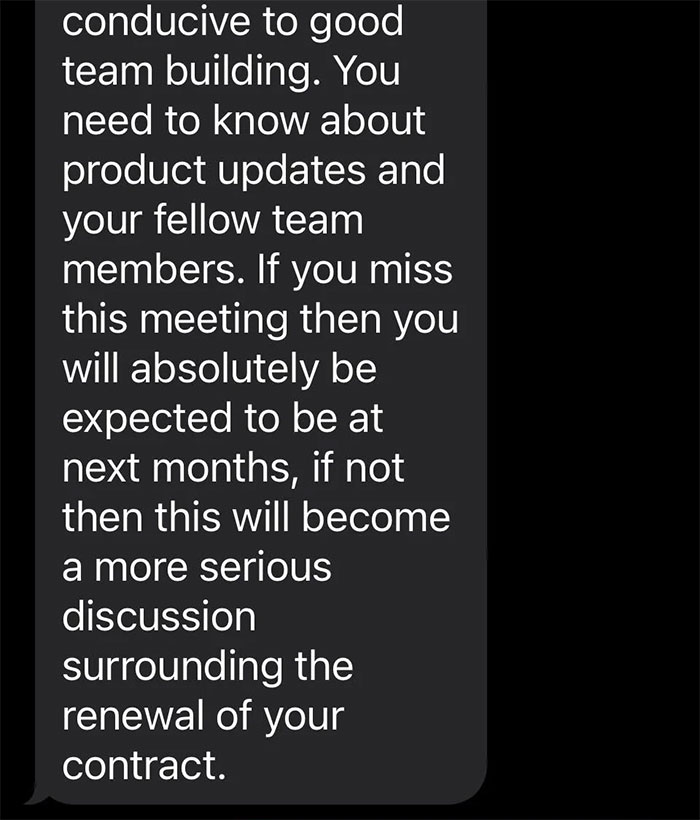 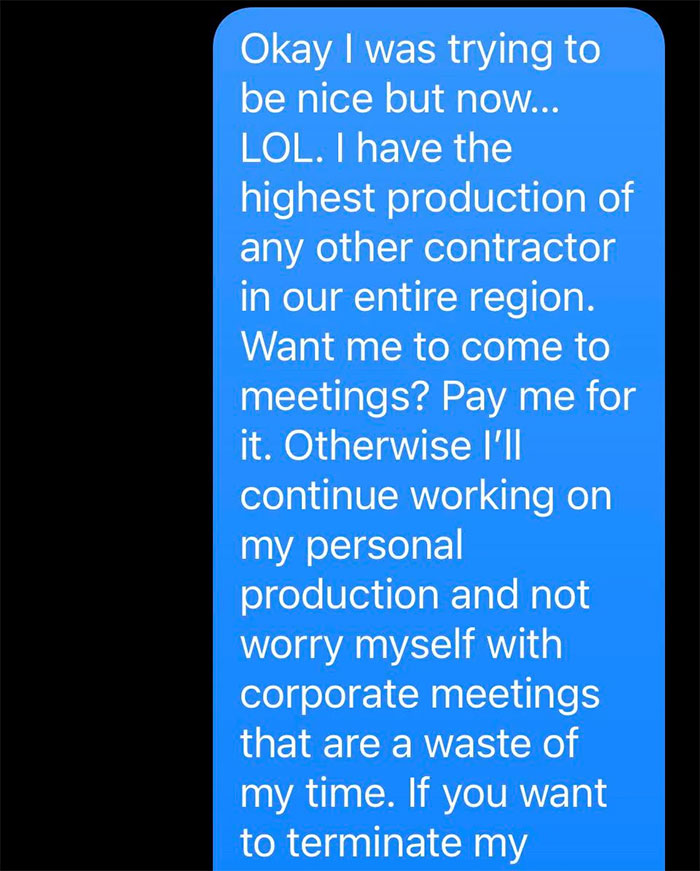 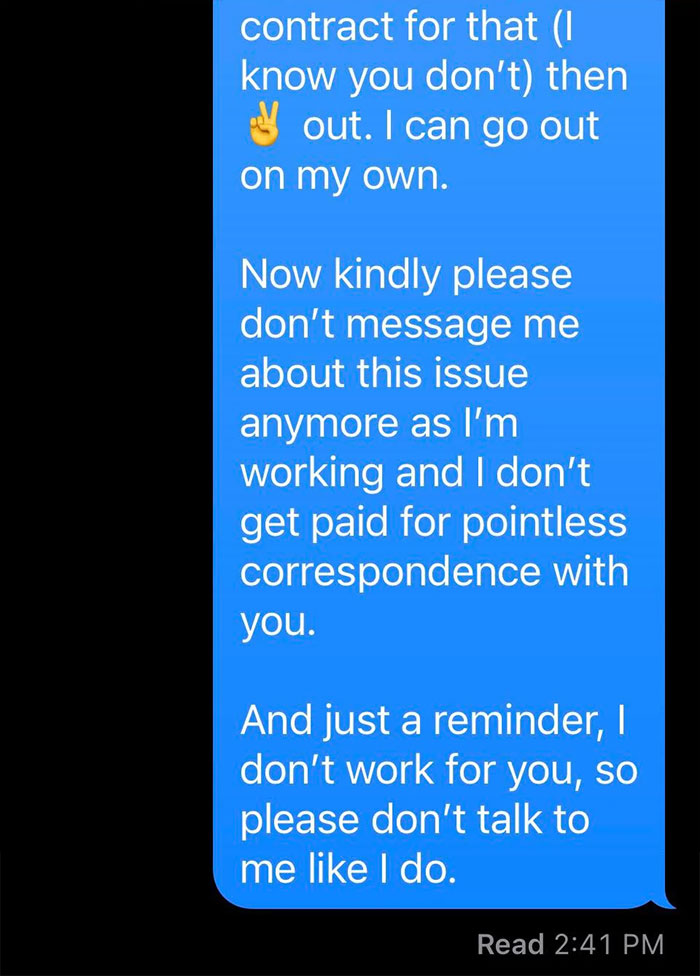 Redditor u/ChoctawJoe told Bored Panda that he absolutely didn’t expect his post to get so much attention online.

“I just posted it thinking I’d get a few laughs, I had no idea I’d end up with thousands of messages and so much attention,” he said that the response has been enormous.

The OP had some ideas as to why his r/antiwork post became so popular: “I think it’s because everyone likes the idea of telling their overstepping authority figure to ‘back off’ and keeping them in check.”

He continued: “Many people have had an overly aggressive authority figure at their job and everyone dreams of being able to tell that person to stop overstepping their boundaries, but we rarely get a chance.”

The author of the post believes that older employees, especially, enjoy having more meetings in person. They tend to shy away from technology. “The management at the company I work with skews older and they’ve always had in-person meetings, and virtual meetings are too new and too impersonal to them,” the redditor told Bored Panda.

“Whereas the younger people who are more used to using virtual apps are comfortable with not physically being in-person.”

The OP added that their situation is fairly unique: “I’m not an employee so I have much more flexibility and bargaining power. If I were strictly an employee then I would have been in a much different situation.”

At one point or another, Pandas, you’re very likely to go to a meeting that’ll make you think: why the everloving frick did I attend? It’s cool to see your coworkers and managers (especially if you get along). It’s important to check in and to communicate.

But let’s be frank. Most of these work meetings aren’t done for the sake of communication. Some happen because there’s an expectation to do them (“we’ve always done it this way!”). Some meetings are held to create the illusion of communication, but they drag on even if there’s actually nothing important to say. And some occur because someone up in management wants to feel heard, important, and in control.

The natural reaction, for many, is to do what the independent contractor from Reddit did: just not go. And if they have the audacity to demand that you come, you can then use it as the perfect opportunity to tackle the topic. For instance, you might do what the OP did and call them out on just how resource-intensive (fuel costs, time, energy) going to those meetings is.

It’s also a great way to segue into having an in-depth discussion about these meetings with management. They might not be aware that there’s an issue with them in the first place (heck, who wants to be the first one to bring the subject of useless meetings up, right?). However, if they start threatening you with “serious discussions” in the near future if you miss any more, it might be time to reevaluate your relationship with your employer.

For instance, it’s perfectly fine to do the work that you’re paid to do without putting in additional effort. It’s recently been nicknamed ‘quiet quitting’ (more like ‘healthy boundaries,’ are we right?) and Bored Panda analyzed it in depth recently.

Workplace expert Lynn Taylor explained to Bored Panda during an earlier interview that the younger generations have watched their overachieving parents allow work stress to consume them, so for them, working endlessly isn’t a badge of honor. A healthy work-life balance is.

“If the trend were renamed, ‘The New Boundary Setting,’ it would sound much more palatable. If you’re now able to set boundaries that protect your mental and physical health, then quiet quitting just means being prudent. It’s a helpful way to operate if you tend to be an overachiever, too. The mentality of giving less could actually bring you to a healthier level of work ethic; more within the bell curve,” the workplace expert told Bored Panda that there are different ways to interpret the quiet quitting trend.

“At the other extreme, is a segment of quiet quitters who are standing up to anything that requires extra effort. And sometimes you have to put in extra time to get the job done, not to mention get ahead. If being a quiet quitter means you have pent-up anger towards business and society putting too much emphasis on work, and you rigidly refuse to work beyond the call, that can hurt your career. That’s especially true in a recessionary period, where unemployment is higher,” she said.

According to Lynn, employees need to feel like they’re contributing to a larger purpose. “ Otherwise, it’s human nature to do the minimum required. Employee engagement begins with your job search. Now more than ever, workers need to find jobs that resonate with them,” she told Bored Panda.

“When work lives are mundane, the primary person who can change that is the employee. If every day seems like the movie Groundhog Day, then clearly it’s time to do something different. That might mean deploying skill sets that can help the company but have not been tapped or even changing jobs. It’s helpful to volunteer for projects that you would enjoy and let your manager know of the range of skills you possess,” she said.

“People go to work for more than a paycheck. Ideally, you should feel like you’re learning from your boss and they’re helping you feel challenged. Employees can also learn from colleagues. A deeper connection than zoom calls and staff meetings is required. Work life will seem more satisfying when relationships with colleagues are productive and enjoyable.”

Here’s what others thought about the viral story. Some even shared some great advice, useful for all contractors 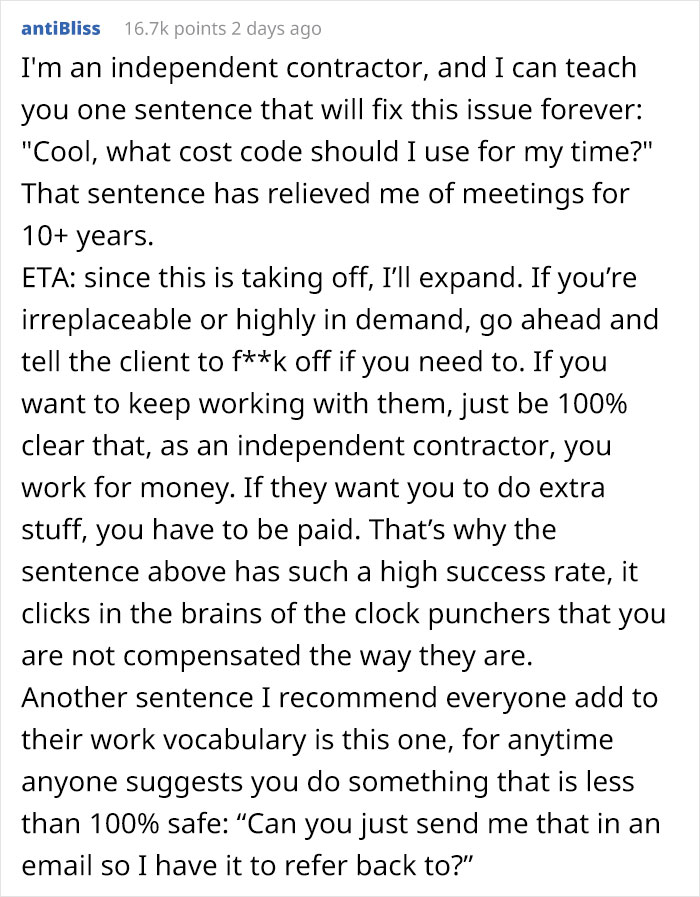 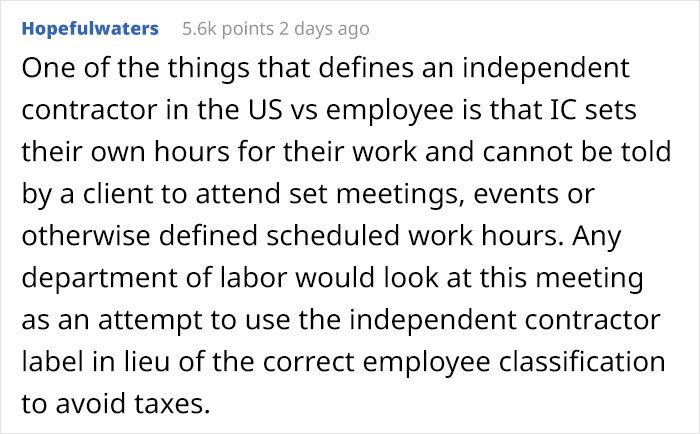 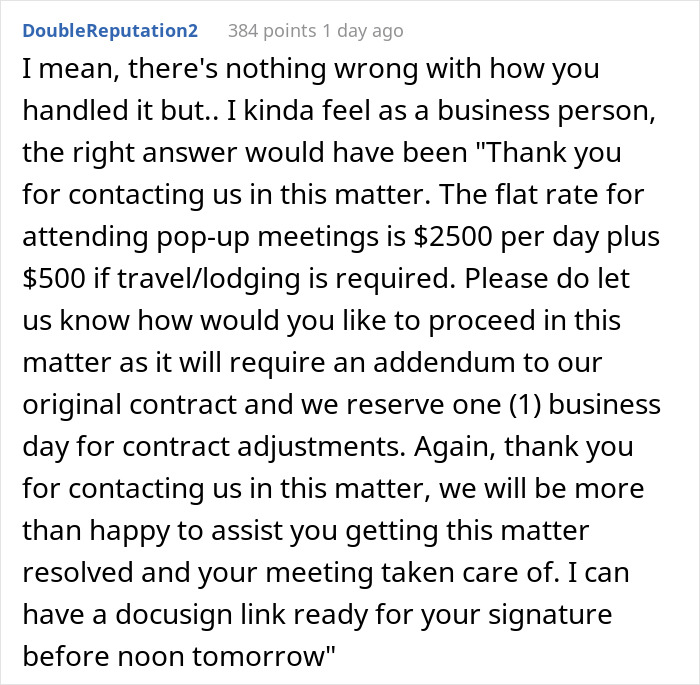 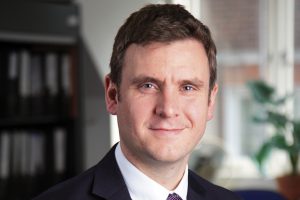