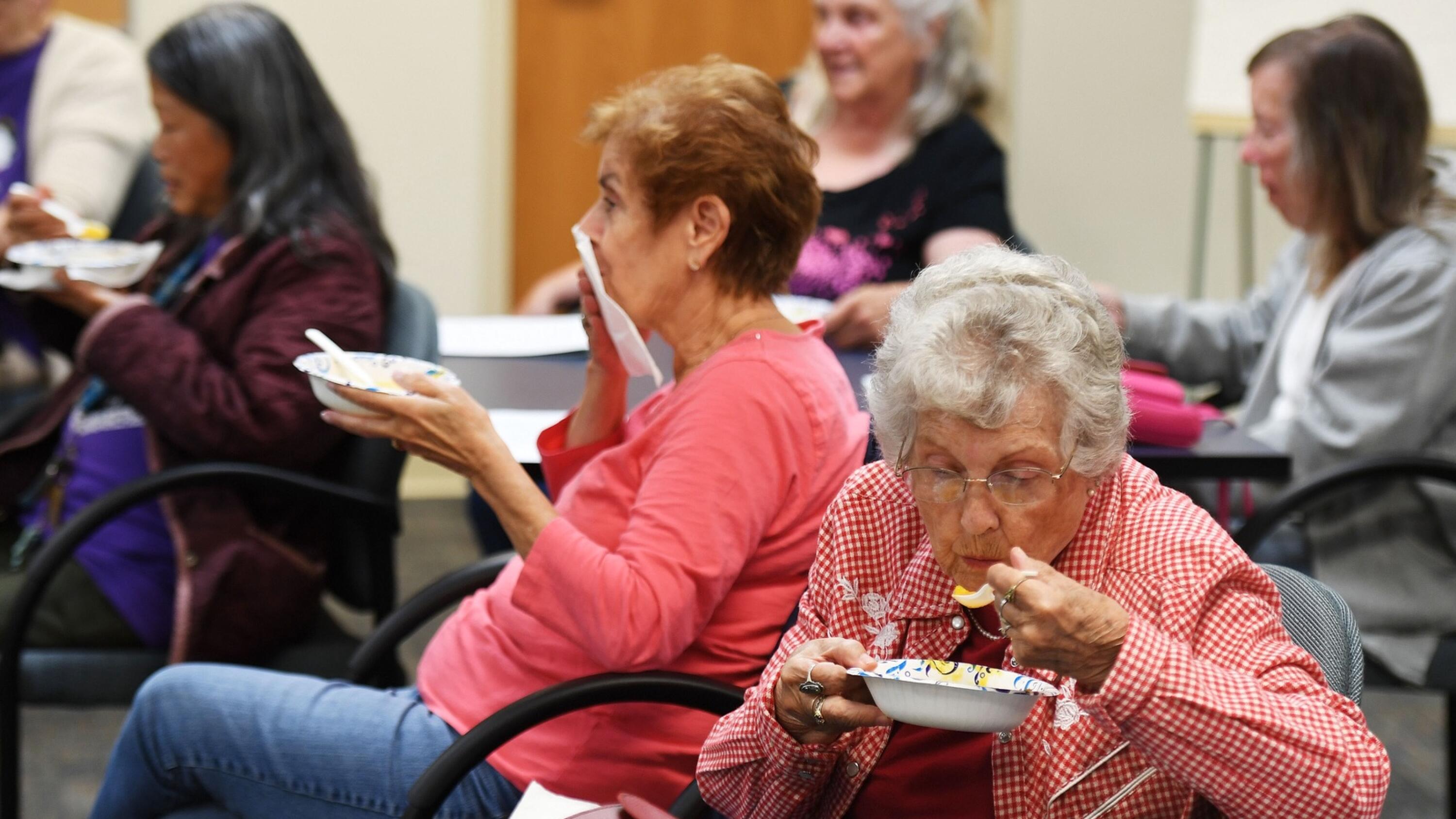 Groton ― Mystic resident Barbara Daniels has always liked to make salads, but she now knows how to cook raw vegetables in different ways so they’re enjoyable.

And she now cooks more at home and has sampled new vegetables, such as Collard greens.

Daniels is among the participants in a 12-week pilot program, held at Thrive 55+ Active Living Center, formerly known as the Groton Senior Center, in partnership with Eastern Connecticut Community Gardens Association. Each week, participants get a bag of fresh produce and healthy cooking lessons on how to prepare it.

“It makes me healthier but it also gives me satisfaction to have learned how to cook better than I did,” Daniels said.

They then go home and replicate the dishes for their own meals, said Tomi Stanley, program supervisor/volunteer coordinator at Thrive 55+.

Stanley said Eastern Connecticut Community Gardens Association, a nonprofit organization, had approached her about starting the free vegetable share program at the center this summer.

Eunice Sutphen, director of outreach for ECCGA, said the idea came about after Thames Valley Sustainable Connections wanted to expand its financial contribution to ECCGA and create a program to not only give food to people, but also get them involved in preparing it.

Thames Valley Sustainable Connections covers the costs of seeds, equipment and other expenses, and the food is grown at Whitfield’s Giving Garden in Pawcatuck.

About 44 people receive vegetables each week that are grown using regenerative agriculture, with no till, pesticides or herbicides, to maximize the nutritional value of the produce and benefit the soil, Sutphen said.

About 25 to 28 of the people participate each week in a cooking class, with Peta Madry, Marcia Benvenuti, and Erica Benvenuti, who volunteering their time to provide cooking lessons, said Stanley.

The program provides fresh produce to people who might not otherwise have access to gardens, because, for example, they live in a small apartment or condominium.

On Tuesday, the last class of the program ― which will be followed by a potluck next week ― Madry sautéed onions and celery in a pan at the table at the front of the room, one of the first steps for the autumn soup she was making, as participants sat at tables and watched her lesson.

Groton resident Mary Fafara said she’s learning how to cook with fresh vegetables and has made soups and a dinner of eggplant meatballs. She’s also picked up cooking tips she had never thought about, such as adding applesauce as an ingredient in the autumn soup to make it sweeter.

“We’re all here to learn, and the teachers have been exceptional,” she said.

Manomoney Subramaniam, who moved to Groton from Singapore last year, said the class has been helpful because most of the vegetables are ones she doesn’t have back home and didn’t know how to use. She now knows how to make sauces, ratatouille, corn muffins, and add zucchini and squash to salads.

She said she’s also made a lot of friends, and people have shared tips on how they prepared the vegetables.

Sharon Chernesky of Groton, who is both a volunteer and a participant, said she’s learning new cooking techniques and enjoying dishes she never would have thought of, such as cauliflower fried rice.

“It’s been great because you can’t grow a garden where we live so to have fresh vegetables has been wonderful,” she said.

Sutphen said organizers hope to be able to bring the program back next year and reach more people.

“It’s opened their palate to new food they haven’t tried before and nutritionally, they’re making better choices because they realize how good vegetables can be,” Stanley added.

Business amd FINANCE
When it comes to decorating a room, a well placed accent wall is a great way to create a focal point. The right paint color or pattern can highlight your best features and add depth to your room. Wood accent walls are one of the most effective ways to make your walls pop and spice up your room. An attractive, well-designed accent wall will add much more value to your home than the cost of the wall. Similarly, accent walls increase your home's overall appeal.
We use cookies on our website to give you the most relevant experience by remembering your preferences and repeat visits. By clicking “Accept All”, you consent to the use of ALL the cookies. However, you may visit "Cookie Settings" to provide a controlled consent.
Cookie SettingsAccept All
Manage consent