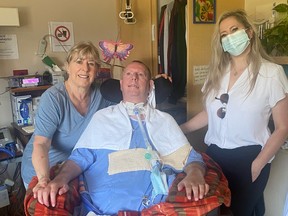 It is hard to imagine anything more despicable than a real-estate developer holding 44 severely, physically disabled residents hostage, but that’s what the Onni Group has been doing since July because of a dispute with the city over money.

Only a day before residents — people with spinal injuries, acquired brain injuries, and several on ventilators — were to begin moving into purpose-built housing in Onni’s 3,005-unit Cambie Gardens, the Vancouver-based development firm owned by the de Cotiis family refused to unlock the door.

Sign up to receive daily headline news from the Vancouver Sun, a division of Postmedia Network Inc.

The next issue of Vancouver Sun Headline News will soon be in your inbox.

Heart-breaking for anyone anxious to move into their dream home, it is devastating for residents like Eric Wegiel whose quality of life is already so tragically circumscribed.

Wegiel has lived at the George Pearson Centre near the Langara Golf Course for 16 years. He has amyotrophic lateral sclerosis (also known as Lou Gehrig’s disease). He is on a ventilator and has both a breathing and a feeding tube.

“I want to cry right now. This is really low that people do that,” his sister, Agnes Cayer, said when she found out why Wegiel’s move has been indefinitely delayed.

After Wegiel was told in July that he wouldn’t be moving into an air-conditioned, one-bedroom, garden-level suite with a patio, Cayer said she saw “the light dim on his face.”

The 70-year-old George Pearson Centre was built as a tuberculosis hospital. Dark, dismal and decrepit, it is managed by Vancouver Coastal Health and is home to 114 people with extremely high-care needs.

The dispute that has halted their moving plans is between Onni and the City of Vancouver over an energy services agreement.

In an emailed response to questions, the city said that agreement would “outline the delivery of heat and hot water to the units the city will own when the project is completed.”

The city provided Onni an occupancy permit on June 3. According to the city, that permit “enables Onni to allow (Vancouver Coastal Health) to access their units at any time.”

It claims that the primary, if not sole, reason for the delay is because the developer is trying to “gain leverage in a commercial dispute”. It is seeking both general and special damages.

In an interview, Vancouver Coastal vice-president Bob Chapman said the health authority felt it had no choice but to sue.

The court filing says that Onni told Vancouver Coastal Health in May that the units would be move-in ready by June. Based on that, the health authority notified Connect Partners, the contracted service provider for the 44 soon-to-be residents of Cambie Gardens, that its services were to commence April 1 at a cost of $675,000 a month.

It also told Pearson employees that starting in September, staff would be redeployed. So, starting next week, the facility will likely be under-staffed because the redeployment cannot be reversed.

It is a “top priority” for Onni to finalize the agreement and allow residents to move in, Duncan Wlodarczak, the Onni Group’s chief of staff, wrote in an email.

The company was “proactively reaching out early in the year to try to expedite this process” and “has been treating this matter with the utmost urgency … as we understand the urgency with which residents move-ins need to occur.”

During the recent heat wave, Wegiel was in the throes of heat exhaustion when his sister, a paramedic, arrived. She swaddled him in wet towels to get his temperature down, and her advocacy resulted in air-conditioners and fans being brought in a few days later.

By then, Wegiel should have been living in a one-bedroom, air-conditioned suite with access to a patio that his family planned to outfit with lawn furniture and plants.

Instead, he and 43 others are caught in the middle of a messy, complicated public-private partnership and are players in a cautionary tale about their associated risks.

It dates back to 2013 when the B.C. Liberal government began a billion-dollar sell-off of public land. Between 2005 and 2015, Onni had donated $581,430 to the party, and it bought the 25-acre site at Cambie and 57th, which some considered the “diamond” in the government’s treasure trove of property.

Over the past four years, the company’s owner — the de Cotiis family — have also been Mayor Kennedy Stewart’s top donors, collectively contributing just under $24,500.

Onni’s $302-million deal included a low-interest loan at 2.61 per cent and doesn’t require the final payment of $44.5 million to be paid until early next year. Within five years of purchase, the property’s assessed value had jumped to $842 million.

In a subsequent and complicated deal aimed at de-institutionalizing residents and integrating them into the community, Vancouver Coastal Health transferred “beneficial title” to the current sites of George Pearson Centre and Dogwood Lodge to Onni in 2016.

Coincidentally, the total cost of that purchase was also $320 million and, as part of that deal, Vancouver Coastal will buy back the 114 “Pearson replacement units” in the two strata-titled towers.

A debate over how taxpayers have benefitted, or not, from these deals can wait for another day. But Pearson residents should not have to wait.

They are already paying an excruciating price as pawns, shamelessly used as Onni tries wring concessions out of the city and its politicians.