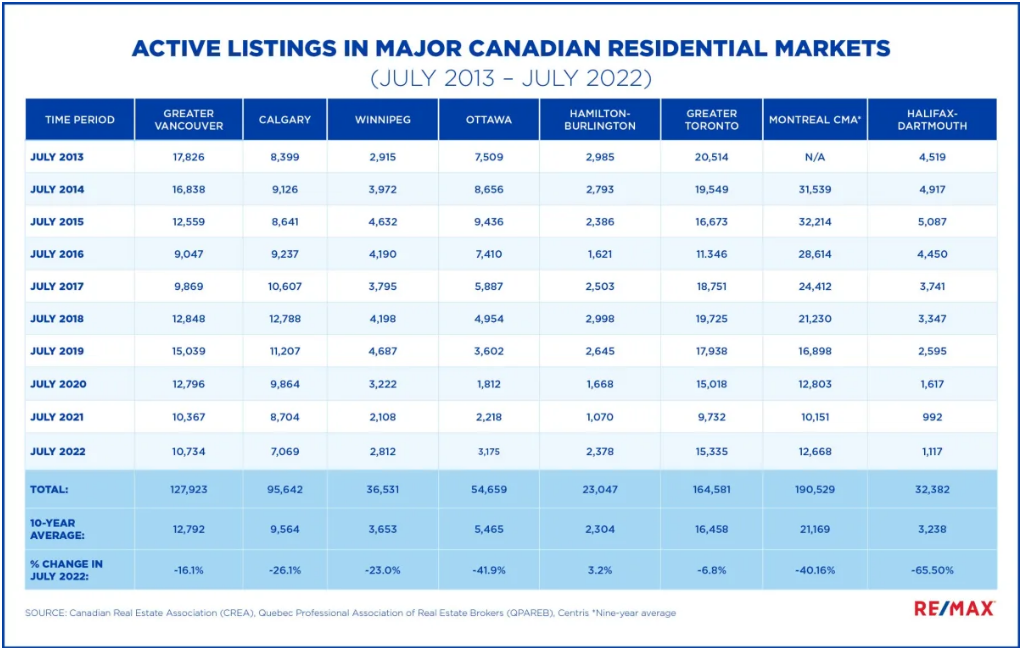 Inventory levels in Canada’s major real estate markets have been declining over the past decade, and active listings in July fell below the 10-year average across the country.

In its recently released 2022 Housing Inventory Report, RE/MAX Canada examined active listings in July from 2013 to 2022 in eight major markets, including Greater Vancouver, the Greater Toronto Area, Calgary, and Montreal.

The report, which also studied Winnipeg, Hamilton-Burlington, Ottawa, and Halifax-Dartmouth, found that inventory levels fell short of the 10-year average in all but one of the markets in July 2022.

RE/MAX noted that several markets, including the GTA and Greater Vancouver, experienced more active July listings between 2003 and 2012 than in the following decade.

The “robust” supply in the early 2000s made for healthy sales and annual price appreciation, and created an anchor for the housing market during the Great Recession, said Christopher Alexander, President of RE/MAX Canada.

“Population growth and household formation have played a significant role in depleting inventory levels from coast to coast over the most recent decade, triggering chronic housing shortages in large urban centres that resulted in mini ‘boom’ and ‘bust’ cycles,” he said.

“If we don’t move now to build more housing in the current lull, it’s expected that this same scenario will continue to resurface over and over again.”

While inventory “remains key” to the health of Canada’s real estate market, RE/MAX said that affordable housing depends on supply.

A June report from Canada Mortgage and Housing Corporation (CMHC) found that to restore affordability, 3.5 million new homes must be built by 2030. However, Canada is averaging just 200,000 to 300,000 new units per year, RE/MAX said.

“The truth of the matter is that we probably need more than the CMHC estimate to create the desired level of affordability,” Alexander said.

“During this window of softer demand, building efforts should be ramped up, not down. The offshoot effect is straining rental markets and contributing to ever-rising levels of homelessness throughout the country.”

The inventory challenge is exacerbated by new housing starts and purpose-built rentals, which “continue to fall short.”

The lack of housing supply, along with rising mortgage rates, is keeping would-be buyers in the rental market, leading to even fewer homes being put up for sale.

At the same time, a “perfect storm” of factors, including global supply chain issues, inflation, and labour shortages in the trades, is weighing on the construction of new homes.

“The feasibility of many new or planned housing starts is now in question, but the ones that already had smaller margins—affordable housing and starter homes—are at the top of the chopping block. If we’re already experiencing an inventory crisis, what will the consequences be when demand rebounds?”

According to the CMHC, there was a decrease in the seasonally adjusted annual rate of housing starts in urban areas across Canada in July 2022.

But the trend was “most pronounced” in the GTA, where an estimated 10,000 units expected to launch for pre-construction sale in 2022 will not materialize.

Alexander called the trend of scrapped and paused projects a “serious concern,” and called for a new long-term development and growth strategy.

Although demand is considerably less than in the past two years, it’s expected to rebound. And with stock already falling behind demand, the market is not prepared, he said.

Purpose-built rentals, new home construction, and policies that support and accelerate residential building activity are “paramount” to averting a further lack of inventory. Without action, affordability will be further strained.

“The trouble is that housing development is a slow process, and experience tells us the only thing slower might be government processes,” Alexander said.

“Removing barriers and cutting red tape is necessary. A crisis is looming, but the outcome is not cast in stone. There is a short runway to reverse course before the impacts become very real for Canadian homebuyers and renters.”